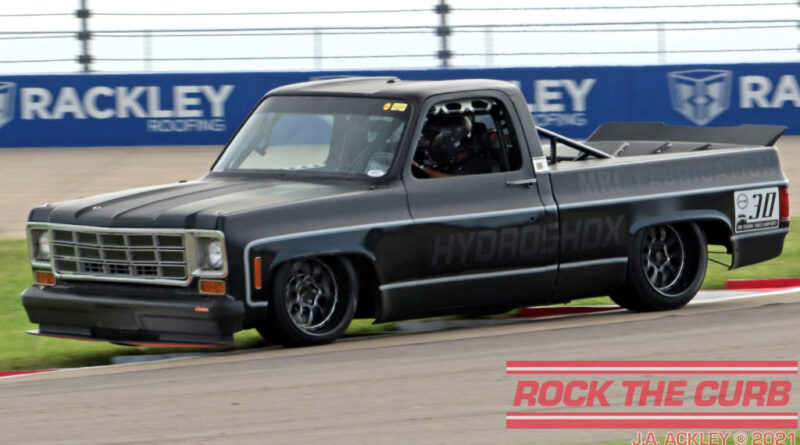 Sure, some serious road racers might laugh when they see the truck of Jimmy Bullard in the paddock. However, don’t mistake his truck as being slow. At a recent NASA Mid South event held at the Nashville Superspeedway in Lebanon, Tennessee, it turned the fastest laps. Not just in its class. Fastest among everyone. Take that, new fabled Corvettes, sleek Porsches, and tried-and-true BMWs.

Bullard originally built the truck to showcase Hydroshox, a product he developed at his MRC Fabrication business with Mittler Bros. Machine & Tool. It serves as an alternative to suspension air bags. It not only allows you to change the height of a vehicle, like an air bag, but it does so without changing the suspension’s rate.

“All the guys in my shop have a racing background or [are] performance-oriented,” said Bullard, who owns three NASCAR late model stock car championships at Caraway Speedway, a paved oval in Sophia, North Carolina. “We got out of racing to build street cars. Our customers want a street car chassis, with a 1,000 horsepower, and air bags on it. That didn’t make sense to us, because you can’t use the horsepower. After I developed Hydroshox, I was like we got to have something to put our shocks on and show everybody the performance of the Hydroshox.”

Bullard came across the Pro Touring Truck Shootout (PTTS) on Instagram. The series gears autocross events toward trucks. MRC Fabrication built the truck specifically for that, but they felt they wanted to do more with the ride.

“Don’t get me wrong, it’s a challenge,” Bullard said of the autocross events, “but we want to say how fast we can go.”

The Pro Touring Truck Shootout (PTTS) promoter asked Bullard to name his truck. He dubbed it “No Recess.”

“Everybody was like, ‘Here come these NASCAR guys, and they think they’re going to outrun everybody,’” said Bullard. “The [promoter] kept calling me [for a name for the truck]. I said, ‘No Recess.’ He said, ‘What does that mean?’ [I said,] ‘It means we don’t f–king play.’”

MRC Fabrication features many experienced veterans in motorsports. That includes shop manager Steve Hmiel. Hmiel owns 16 wins as a crew chief in the NASCAR Cup Series, with drivers such as Dale Earnhardt Jr., Terry Labonte, and Mark Martin. At Nashville Superspeedway, Bullard gave us a tour of “No Recess” in the paddock area.

A dirt-oval late model inspired this suspension, which features a Wehrs Machine birdcage and an Earnhardt Technologies Group (ETG) suspension limiter. Bullard said he ran Penske shocks at Nashville to compare it to his Hydroshox. He said he was “just as fast on the Hydroshox as on the Penskes.”

“When we go into a corner, the body roll steers the rear end [with the dirt-late-model style of suspension],” said Bullard. “I can set the truck up much tighter, so I can go into the corner two to three car lengths deeper. When I get to the apex of the corner, where it wants to start pushing [aka understeering], that’s when the droop limiter comes in. When the body rolls over, the droop limiter will lift the [load] on the inside tire and let [the truck] rotate through the center of the corner.”

“A Panhard bar will always want to pull one way,” Bullard said. “A Watt’s linkage allows the rear end to go both ways.”

The truck uses axle tubes constructed out of incredibly dense — read that as heavy for its size — and expensive tungsten.

Robert Yates Racing, with a Daytona 500-winning racing heritage, put together this power plant based on the Chevrolet Performance CT 525 6.2L engine. It puts out 566hp on the engine dyno. A Willy’s Super Bowl 780cfm carburetor supplies the engine with fuel and air.

Just about everything on the truck Bullard and his team at MRC Fabrication builds in their shop. That includes these machined billet aluminum upper A-frames. He used that style of upper A-frame for “bling factor.”

“We tried to make every piece we could, so that way we use the truck as a display for what our shop is capable of doing,” Bullard said.

A carbon-fiber front bumper and splitter adorns the front of the vehicle. The body itself consists of a 1985 Chevrolet cab mated with an early 1970s Chevrolet C-10 body, including front grill and headlights. The 1980s cab allows for an air duct between the hood and the windshield, which Bullard desired.

Jimmy Bullard uses this style of gas pedal because he brakes with his left foot and gases with his right. MRC Fabrication’s Gene DeHart came up with the pedal idea. DeHart once worked with NASCAR racer Terry Labonte, who used his feet in a similar fashion.

“On road courses, [Gene] built him a fat gas pedal with a lip on the side,” said Bullard. “You got a big pedal, not a itty bitty pedal, because you use more foot to do both things.” 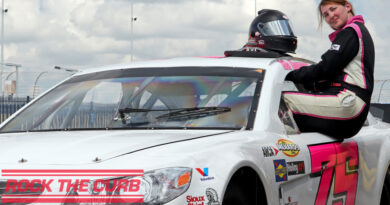 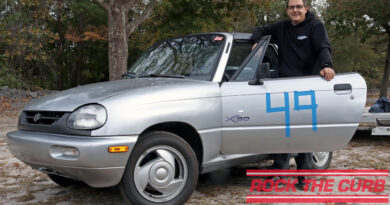